Why We Sent Our Baby To China

Mr. FAF and I have a son, Baby FAF, who’s a bit older than two years old.

Right before Baby FAF turned one, my in-laws took him to China to take care of him.

Baby FAF has lived half way around the world from us for more than a year.

It broke our hearts to see him leave. When Baby FAF left us, he was still too young to even cry when we said good-bye to him.

He didn’t know what was going on and was just looking at all the shiny things at the airport.

I just remember right before he went to China, Baby FAF was starting to get really clingy to me.

He was just learning to cruise around the house and barely spoke anything except for ‘mama’ and ‘baba’ which mean ‘mommy’ and ‘daddy’ in Mandarin Chinese.

Whenever Baby FAF saw me, he would cry and want me to hold him. It was the last month before he left.

We were just starting to develop a closer mother-and-child bond. Then we had to say good-bye.

You may be wondering what parents would let their kid live thousands of miles away from them for more than a year.

When Baby FAF was born, Mr. FAF and I were not in a good position to be parents.

Mr. FAF was a grad student receiving a small stipend from his school. It was enough for him to support himself, not a three-member family.

I was in my last semester in grad school, worrying about graduating and not knowing when or whether I would be able to get a job. I had a small stipend as well, but it covered just the basic expenses for a single person.

Technically, neither of us had a full-time job, and our savings were minimal. And Mr. FAF lived more than 10 hours away from me.

We could have planned it better, but we didn’t. To this day, I still feel guilty for not giving Baby FAF the best situation to be in when he came into this world.

Luckily, our parents came to our rescue. My family sent us some money for the baby. Mr. FAF’s parents came all the way from China to help us take care of Baby FAF. My father-in-law technically quit his job to be an unpaid babysitter.

After my in-laws stayed in America for one year, it was time for them to go back to China. We had four options:

1. My in-laws taking Baby FAF to China with them for a year.

2. Me taking care of Baby FAF by myself in DC since Mr. FAF had to stay in grad school in another city.

3. Me becoming a stay-at-home mom and moving to Mr. FAF’s city with Baby FAF

4. Mr. FAF quitting school to be a stay-at-home dad while I worked to support the whole family

We ran a thorough analysis of each option to see which one would work best for our family.

Option 1: My in-laws taking Baby FAF to China with them for a year.

This would be the easiest solution for us both financially and career-wise.

Daycare fees and the mortgage payment on our house would take up my whole monthly paycheck. There would be no room for utilities, food, for any other expenses.

2. I would be able to focus on my job while Mr. FAF could concentrate on his PhD program.

I wouldn’t have to worry about taking sick leave for an extended period of time to take care of Baby FAF by myself and risk losing my new job. The only thing I would have to do was perform well at work.

Mr. FAF wouldn’t have to worry about his wife and baby living more than 10 hours away.

1. We would be away from Baby FAF for a whole year and couldn’t see him walk the first steps or say the first words in his life.

2. It would be hard for my in-laws to take care of a toddler since they were getting old and had some health issues.

Option 2: Me taking care of Baby FAF by myself in DC since Mr. FAF had to stay in grad school in another city.

1. Baby FAF could stay in America with us. I would be able to witness all of his development stages, and Mr. FAF could visit us once a month.

1. Back then I had just started a new job after yeas of being in school. I had always had my in-laws help take care of Baby FAF, so the thought of raising a one-year-old by myself as a new mother terrified me.

We had no family in DC or anywhere in the US. I was afraid something would happen to us or that I wouldn’t do well at my job and get fired. Without my job, we would lose the house.

My parents, worried about me, suggested that this wasn’t a good option since my career should be my priority at that time. It was my very first full-time job.

2. This option wouldn’t be financially feasible since my income was barely enough to pay for daycare and the mortgage. Mr. FAF’s stipend was enough to support only himself.

Option 3: Me becoming a stay-at-home mom and moving to Mr. FAF’s city with Baby FAF.

1. The three of us could live together.

1. We would be in serious financially difficulty. Mr. FAF discussed the possibility of us moving to a cheap basement somewhere in his city. Though excited, I was worried about the safety and health risks for Baby FAF living in a basement.

2. I was in school for years before securing my first full-time job. Both my parents and Mr. FAF encouraged me to stick with the job. Becoming a stay-at-home mom right after my graduation would be detrimental to my future career. Getting a job in Mr. FAF’s city wasn’t an option for my expertise. I tried for a long time, and it didn’t work.

3. Mr. FAF would be stressed out about his PhD program and providing for his family.

Option 4: Mr. FAF quitting school to be a stay-at-home dad while I worked to support the whole family.

1. This option was financially feasible.

2. We could stay together as a family. My salary would be enough for the mortgage and our living expenses.

1. Though feasible in the short-term, this option would be a blow to Mr. FAF’s future career and income potential. We both knew for sure that once Mr. FAF got his PhD in Computer Science, his salary would be substantially higher than both of our then combined incomes.

Two days before my in-laws went back to China, Mr. FAF and I went to check out an in-home daycare in the neighborhood that was significantly cheaper than a daycare center. We wanted to be with Baby FAF, so we decided to send him there after my in-laws left.

Mr. FAF’s parents, however, didn’t take the news very well. They were angry with us for not telling them earlier. They were prepared to take Baby FAF back to China to introduce him to his extended family. It was important for them partly because Baby FAF is their first and only grandson who would carry on Mr. FAF’s family tree.

My father-in-law was particularly attached to Baby FAF and said he wouldn’t leave without the baby. And he meant it.

We finally gave in. After all, no cost-and-benefit analysis could trump love and family bonds.

I’m very happy to announce that Baby FAF has come home in DC to stay with us for good. We will be reunited as a family once Mr. FAF finishes his degree later this summer. After all those daily calls on WeChat (Chinese version of Skype), we are now able to see our baby every day.

I told Mr. FAF that I don’t want to send any of our future children to Vietnam or China except for the summer vacation when they’re older. But I feel very grateful for my in-laws for extending their helping hands when we were in need.

My parents were also more than happy to help us take care of Baby FAF in Vietnam should we want them to. They’re among the best parents and parents-in-law anyone can hope for.

And as I mentioned in a previous post, this is one Asian tradition that we really value. Asian grandparents help take care of their grandchildren so that the parents can focus on their careers, at least in the beginning.

Mr. FAF and I sometimes joke about having Mr. FAF watch Baby FAF’s future children, change their diapers and feed them daily just like what my father-in-law did for Baby FAF.

But I know whether our grandchildren are cute or not, we will take care of them. And we will do it well just like our parents did.

What I Got For Mother’s Day

How Frugality Brought Us Together As A Couple

How Mr. FAF And I Handle Our Finances As A Couple 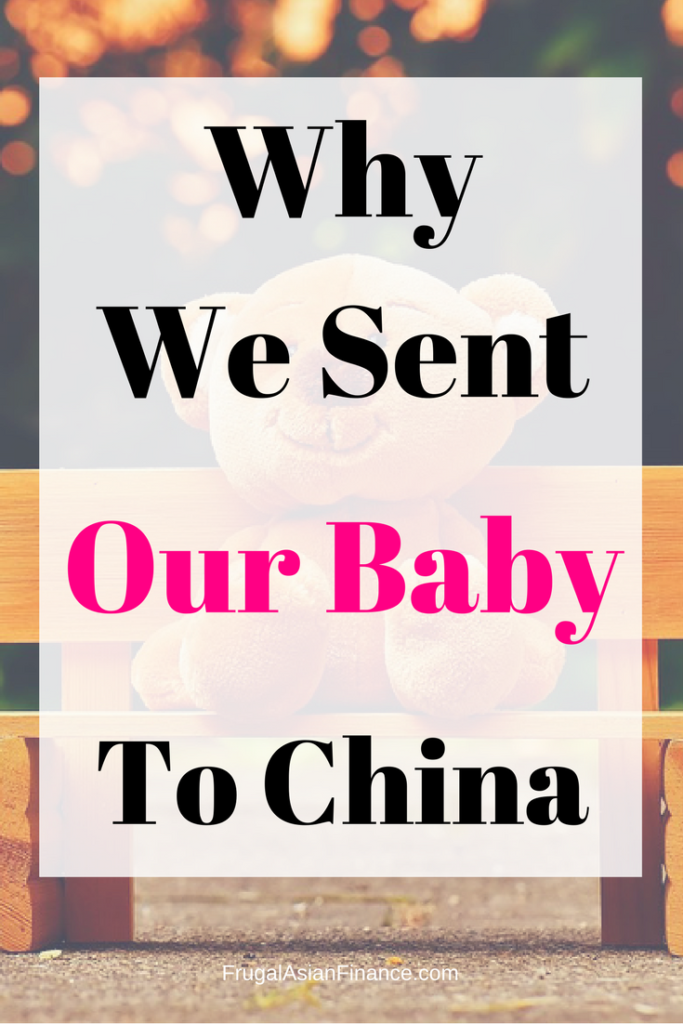 Author: Ms. FAF
Filed Under: Family, Relationships
The Pros & Cons of Our Long-distance Marriage
How To Find A Frugal Husband

55 thoughts on “Why We Sent Our Baby To China”