Sometimes I still can’t believe Mr. FAF and I have been married for four years. For us, it’s been a long journey.

We first started our relationship knowing that we would have to be far away from each other for at least three years until Mr. FAF finished his doctoral degree.

That wait turned out to be four years. Mr. FAF would spend 20 hours on the road each month to keep our long-distance relationship going strong.

We then had to send our one-year-old son to live with my in-laws in China for a year so that both of us could focus on our careers.

Finally, in August this year (2017), our family was reunited.

Mr. FAF finished his PhD and got a job in the DC area.

My mother-in-law (MIL) took our son back to us. Everything seemed to go perfectly well.

At least, that’s what our family and friends thought.

What they didn’t know is that Mr. FAF and I had our biggest fight ever two months after our family reunion.

You might be thinking what in the world we could have fought about now that we seem to have everything.

I asked myself that question as well. Everything looked so perfect from the outside. But inside our house, Mr. FAF and I fought constantly.

It ranged from big issues like our personality clash to small things such as our daily habits that annoy the other. Those problems seem to have magnified since we now see each other every single day instead of once a month like before.

All the seemingly tiny conflict we have had over the past four years have all come together and created a rift between us.

At one point, Mr. FAF and I even felt that we just couldn’t keep walking on the same path anymore. We are two different individuals with two different personalities.

Mr. FAF is patient, and I’m generally impatient and want to get things done as soon as possible. Mr. FAF is disorganized and forgetful, and I want everything to be in a particular order.

Mr. FAF thinks I’m stubborn, and I think he always says that his habits are his style and refuses to change.

Mr. FAF is not detail-oriented, and I pay close attention to every little detail around me.

I think I take over too much housework, and that Mr.FAF is just oblivious to what I do and takes me for granted.

I think Mr. FAF doesn’t spend enough time with our son. He, on the other hand, insists that he tries, but that Baby FAF doesn’t want to play with him.

I want us to go to more get-togethers or events in DC to meet new people and make more friends. But Mr. FAF is shy and doesn’t want to get out of his comfort zone.

There are times when I feel like I have to fight with Mr. FAF to get an answer or more information from him. When I don’t have complete information about something, I tend to make assumptions. And when I’m angry, those assumptions tend to be pretty negative, which in turn causes Mr. FAF to shut down even more. That is the hallmark of our communication breakdown.

Sometimes we just can’t remember what we fought about, and we kept fighting.

Fortunately, at one point, both of us got sick and tired of all the tension and conflict at home. Instead of giving up on our marriage and efforts all those years, we decided to sit down and have an honest conversation about how to move on.

That’s when I realized that money doesn’t solve all the problems in a marriage. We no longer have to worry about money, but money can’t reconcile our differences. Only communication can. And communication doesn’t cost a penny unless we decide to see a marriage counselor.

Mr. FAF and I sat down to tell each other what we’re not happy about and why we treat each other the way we do.

For example, I tend to snap at Mr. FAF about little things. Mr. FAF thinks I get irritated too easily. He doesn’t know why I get upset whenever he asks me to make him tea or write on our community Facebook page on his behalf.

And I told him it’s because I have already done most of the housework at our home. I don’t think it’s reasonable of him to ask me to do every little thing in his life.

I take care of our son from the moment he wakes up to when he goes to bed. I clean the house, do the laundry, pack his lunch, and do the dishes.

Why can’t he just make more effort to help out with chores or do simple things like asking a question on a Facebook page? Why is it that I always have to be the one doing things and he gets to sit around enjoying life?

We talked about those topics, and it really helped us understand each other’s mindset. I felt like Mr. FAF took me for granted, and I was right. Mr. FAF agreed that he needs to appreciate what I do at home and helps out around the house more.

I also understand that Mr. FAF wasn’t born to be a detail-focused person, and it has definitely affected his academic and professional life. We came up with a solution for his forgetfulness: Labeling.

For example, Mr. FAF always forgets to use a mug when he brushes his teeth. He stuck a big label with the word “MUG” onto the mirror so that he will remember to use it next time.

He also put labels in our storage closet for medicine, household items, and other things so that I won’t have to help him look for his stuff every single day.

Imagine you come home from work all tired and hearing your spouse say they can’t find their wallet on a regular basis. I don’t know about you, but it really gets to me.

But those fights had a happy ending. We resolved a lot of the ongoing conflict that we had been having in our lives. We understood each other better and agreed to improve ourselves for our own sake and our family.

If there is one good thing that came out of those conversations, it is that we should discuss with each other more often whenever we are unhappy about something instead of keeping it bottled inside.

When I wrote the post about the financial implications of housework, Joe at Retire by 40 and other well-intentioned readers/bloggers told me to do exactly that: communicating with Mr. FAF instead of keeping it to myself.

I didn’t fully understand such words of wisdom until I finally exploded and told Mr. FAF everything that I felt at the time. It helped me feel relieved and understand Mr. FAF’s reasonsing, and it helped him understand me better as a wife and a mother.

On our anniversary, we left home at 3:30 PM on a Sunday to go to the city that has our favorite steak house. My MIL kindly agreed to babysit Baby FAF for us.

Mr. FAF took advantage of this opportunity to have a $5 haircut from an older Chinese lady. She spent 40 minutes cutting Mr. FAF’s hair. He gave her $10 afterwards, but she refused to take the bill and only accepted $5. We were touched by her gesture.

We then went to visit an older Chinese couple in the area who used to live close to us. We also dropped by a Dollar Tree to pick up some Christmas decorations for $2 (I know!). Mr. FAF also got a bottle of Pepsi for $1. Our celebration ended with a $38 dinner that left us hungry later that day. 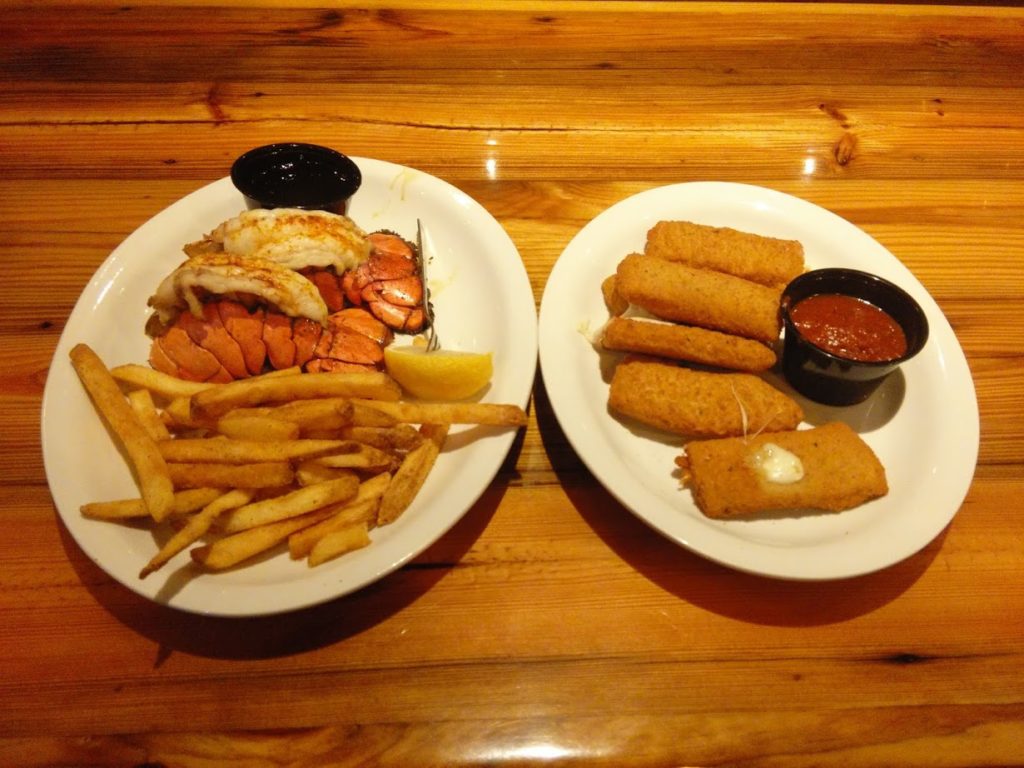 At 11:30 PM that day, after having a serious conversation about our marriage, Mr. FAF and I went to the kitchen to eat leftovers and watched half of the movie “Madagascar 2” before going to bed.

In total, we spent $46 on our anniversary. We could have chosen a more frugal way of celebrating such as cooking at home. But we opted to go out for a change (aka no fussy toddler) and to keep up our tradition of eating at our favorite steak house on our anniversary.

We woke up the next day feeling happy.

It seems to me that every time before Mr. FAF and I have a big fight, we’re drifting apart from each other. However, after we reconcile our differences and reach an agreement, we come to appreciate each other more.

Mr. FAF and I have never spent more than $100 on our anniversary. I do want to travel to some exotic place or try an expensive French restaurant. But thinking about spending a huge amount of money on a celebration doesn’t make me that much happier either.

Maybe one day we won’t care about money anymore and just do whatever we like no matter no expensive it is. But for now, our fights have shown me that even when our household income has gone up by 128%, our happiness definitely hasn’t doubled.

Money has put our financial worries at ease, but it definitely hasn’t brought us a perfect marriage. Unless we have honest conversations with each other (which could come free of charge), Mr. FAF and I won’t be able to reconcile our differences and reach a compromise that makes both of us happy.

How Our Lives Have Changed With A 128% Increase In Income

The Pros & Cons Of Our Dual-Income Family

Housework – The Financial Decision In A Marriage

The Struggle For (Financial) Power In A Marriage