Hubby Decided To Travel Alone. And This Is What Happened.

After writing the What To Do When Your Spouse Wants To Travel Alone post, I got so many comments from you all saying that it’s normal for Mr. FAF to want to travel by himself.

Some also expressed their confusion as to why I was unhappy to let Mr. FAF go on a trip without me.

I think the reason has to do with my own insecurity.

Mr. FAF and I were in a long-distance marriage for four years and spent most of that time in two different cities.

I thought that Mr. FAF would like to make up for such lost time by traveling with me more often.

The fact that he wanted to leave me at home made me feel unwanted and left out.

But now I know, thanks to you all, that we all need our own space despite being married.

He ended up going on the trip for nine days instead of three as originally planned.

— First two days in Austin to visit his friend.

— 2 days in Dallas to attend a wedding

After Mr. FAF came back from the trip, we both learned valuable lessons about ourselves and our family.

1. We tend to take each other granted at home.

Both Mr. FAF and I love stability and routines. Boredom never sounds good. But to us, having no big emergencies or unpleasant surprises can be so fulfilling sometimes.

Every day, we wake up, get ready for work, head out the door, come home, eat, take a shower, hang out for a bit, and go to bed.

Related: The Glorious Life Of A Personal Finance Blogger

When Mr. FAF was on the trip, he just wasn’t at home anymore. For the first two days, I really missed seeing him. Usually, when I get home from work and see his car, it means Mr. FAF is already at home waiting for Baby FAF and me.

After he left, the sign of his car parked in front of our house didn’t mean the same thing anymore. I got excited for two seconds upon seeing it and got disappointed: “Hubby won’t be home for the next week.”

I adjusted after two days just like I did when we were doing long distance. But deep down, I just couldn’t wait for him to come back.

Mr. FAF told me that the moment he left for the airport, he started to feel uncomfortable. Prior to that day, he had been gushing about the trip every day saying he was excited and couldn’t wait to see Austin. He got a bit melancholy after leaving home.

I told him to just cheer up and enjoy the trip while it lasted. And he said he missed our son and me. He’s not the type of guy who says romantic things often (or maybe ever), so when he does say it, I know he really feels strongly about his emotions.

Related: Why I Told Hubby To Stop Buying Me Flowers

I told Mr. FAF that it might get lonely on the  trip, especially when he stayed at the hotel.

I knew because I had felt that way before.

No matter how nice or clean the hotel is, loneliness does set in and can’t be dispelled by the cable TV or phone calls.

In fact, I was so lonely staying at a hotel on a work trip that I got really upset at Mr. FAF for not wanting to say romantic things to me on the phone.

I later came home to find a bouquet of roses and a very touching note from him on my desk.

Mr. FAF was so excited that he didn’t pay attention to my warning. Then on the second night in Seattle, Mr. FAF called me on bed and told me he didn’t feel happy:

Me: Are you lonely at the hotel?

Me: Do you want to come home?

During his work trip in Seattle, Mr. FAF dined out three times a day every day on his company’s budget.

He would send me photos of the food on a regular basis. But he said it wasn’t that great, and that he missed the food at home. 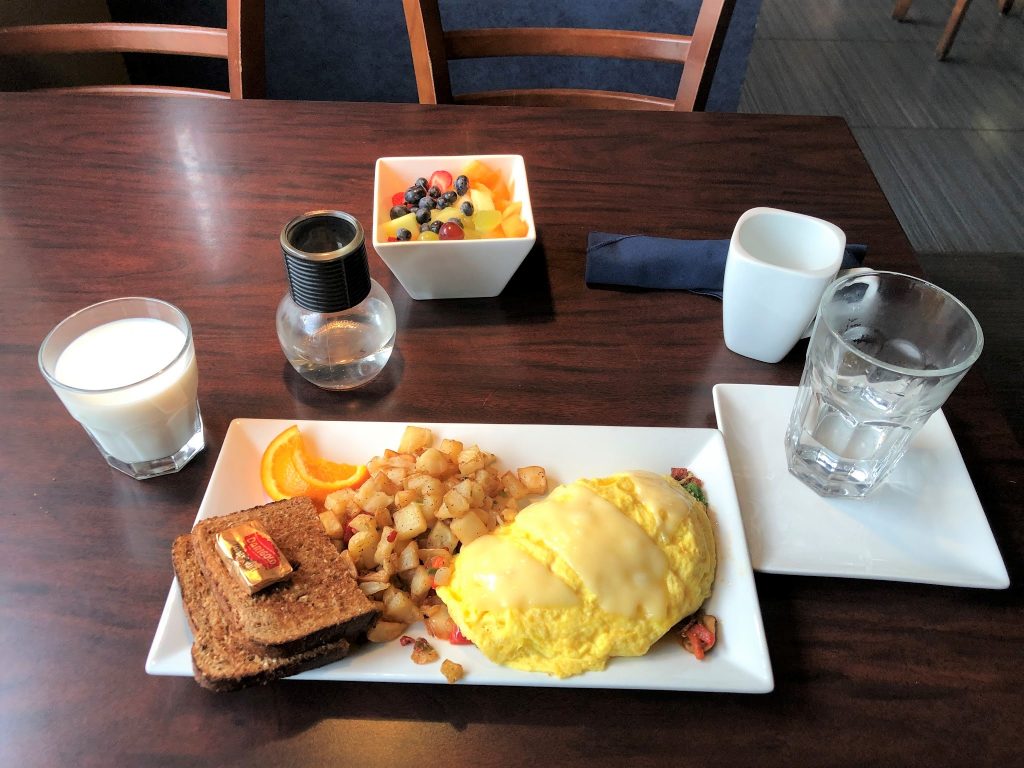 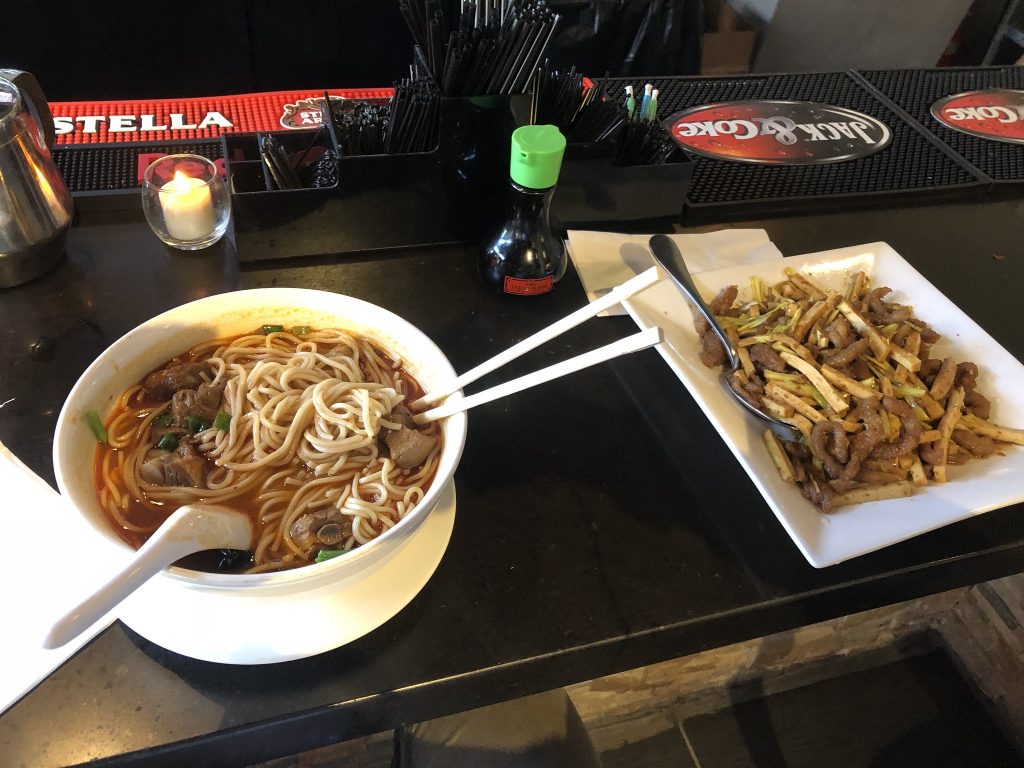 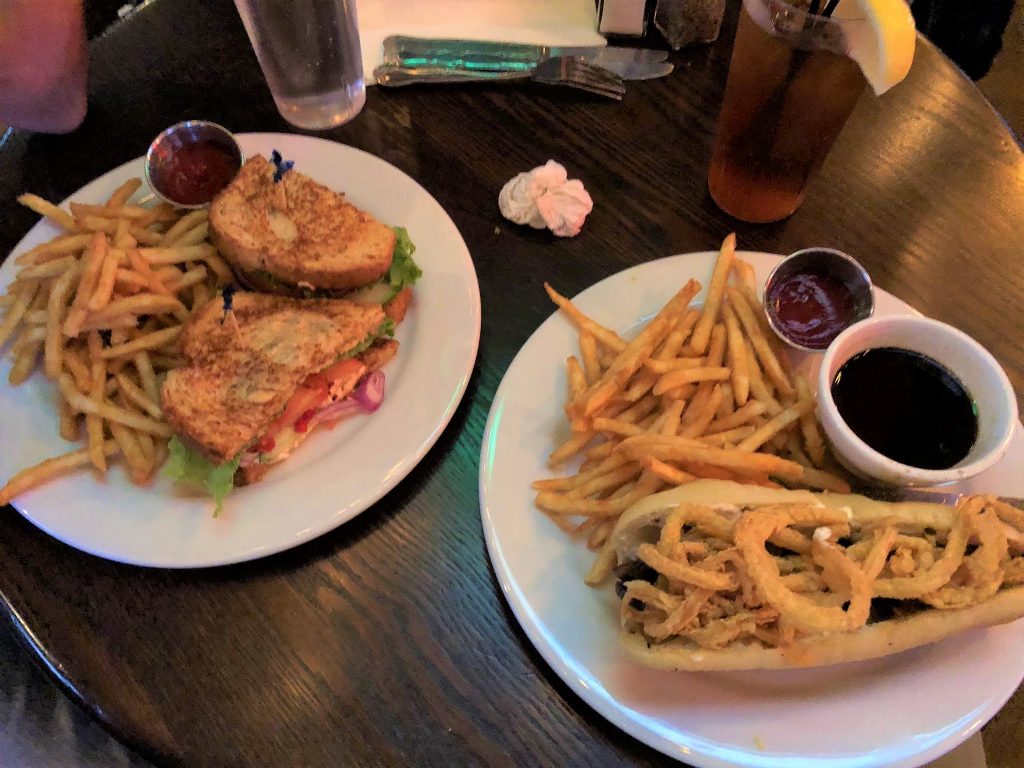 Dinner with his colleague: Cheesesteak & sandwich

I couldn’t help but feel a bit envious that he could eat all of those delicious dishes without me.

If I were there, we could enjoy it together.

Mr. FAF’s boss encouraged his team to take long flights to get cheaper prices, so he did. His flight home from Seattle to DC was almost 8 hours with a layover in Chicago.

He was supposed to arrive at home at 11 PM on a Friday night. But it turned out to be 1:30 AM since the flight was delayed. When I called him at the airport, Mr. FAF said he had had some sushi but was still hungry.

But he didn’t feel like eating anything else at the airport and just wanted to get home as quickly as possible to eat home-made food. All of us were happy when he finally arrived at home. 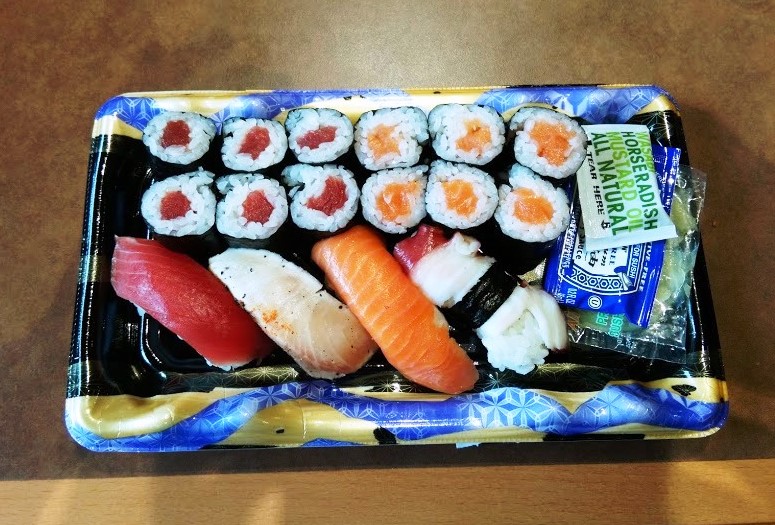 To Mr. FAF, sushi wasn’t as good as home-made food.

Due to the time difference between DC and Seattle (3 hours), his sleep schedule was turned upside down. It took him a week to get back to his normal schedule. Jet lag can definitely kill the mood sometimes.

Related: Why We Are Shopping For A Second House

4. I no longer feel guilty about wanting to travel alone.

My boss has been talking about sending our DC team to our headquarters in another state for a retreat. Prior to Mr. FAF’s trip, I would feel guilty about leaving him and our son at home.

I kept hoping that we wouldn’t have to travel anywhere and would decline the invite if they asked me to travel. If it’s to meet a client, I’d definitely go. If it’s for a retreat, maybe they’d understand I have a kid at home. That’s what I thought.

But after Mr. FAF enjoyed the 10-day trip alone, I feel like I could and should enjoy myself more without feeling guilty. Mr. FAF is also ok with me traveling somewhere else with a female colleague after the retreat.

We ended up not going on a retreat since my boss wanted to cut costs. If now I realized that just because I’m a wife and a mother doesn’t mean I should stay at home all the time and not travel at all.

Related: Housework – The Financial Decision In A Marriage

5. We continue to plan our travel together as a family.

Prior to the trip to Dallas and Seattle, traveling alone was the only thing Mr. FAF kept talking about. However, after coming home, he has been discussing our family travel to Raleigh, Austin, and other cities for the summer and next winter break.

I asked him if he wanted to do solo travel more, he said not any time soon, and definitely not once a month since that would be too much.

Sometimes we just need to give our spouse some space to help them and us relax and realize the value of family time.

Overall, I’m glad Mr. FAF had a good time on the trip. I also had an opportunity to adjust my mindset and be open-minded about giving my spouse more space.

We did do long distance for a long time. But we are together as a family now. And it’s important for each of us to have free time for ourselves ourselves and enjoy life.

My free time might be more limited than Mr. FAF’s due to child-rearing and housework. But it’s upon me to talk things through with him and reach a decision that both of us are happy with.

Many people told me that a happy marriage is about communication and compromise. And now I couldn’t agree more.

What To Do When Your Spouse Wants To Travel Alone

Housework – The Financial Decision In A Marriage

How To Save Money On Food While Traveling

Author: Ms. FAF
Filed Under: Family, Finances, Relationships, Travel
Lending Money To Friends Can Ruin A Friendship. This Is My Story.
Time To Freak Out: My Mom Can’t Help Us With Our 2nd Baby

13 thoughts on “Hubby Decided To Travel Alone. And This Is What Happened.”